While some industries are going through a massive reorganization toward decentralization (Internet/Web3), manufacturers still tend to cluster in regions. A recent piece in the Financial Times indicates that Ford is choosing Tennessee for its electric vehicle factory in order to be closely located to the rest of its manufacturing geographic footprint. The piece also provided a graphic of the ‘Automotive Alley’ in the United States which extends from Detroit down through Alabama. This clustering of suppliers, technical centers, and manufacturing facilities creates a robust set of infrastructure to expand knowledge of automotive engineering within the United States. 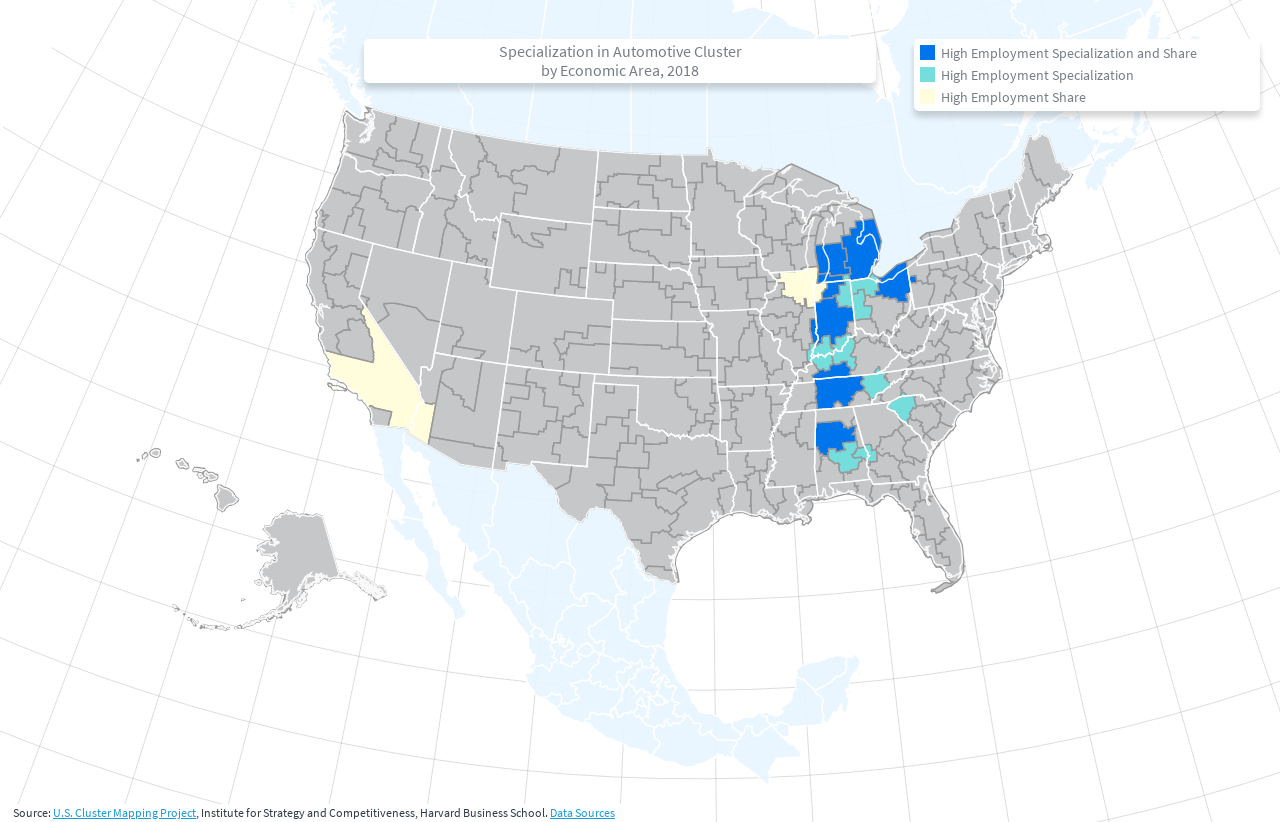 China has a vast automotive manufacturing footprint needed to produce over 25 million vehicles each year. The location of their plants seems to map pretty closely to population density. Perhaps the only outlier are facilities in Central China and the Hubei province in particular. Recently, Tesla decided to place their second gigafactory in Shanghai that will also include engineering and design teams.

Within the US, Detroit still maintains the largest density of manufacturing facilities due to the “Big 3” domestic manufacturers of General Motors, Ford, and Stellantis. In the southern part of ‘Automotive Alley’ (Kentucky, Tennessee, Alabama) most of the foreign automotive leaders have developed a manufacturing footprint. Out West, the upstart electric vehicle manufacturers have taken root. Unlike in China, Tesla decided to place Giga 5 in Austin, Texas which is not a traditional automotive cluster.

In Japan, Toyota and Honda dominate the foot print. Toyota, just outside Nogoya, has a dense cluster of Toyota plants. Honda, based in Tokyo, maintain a large presence in the metropolis. Overall, automotive manufacturing is evenly dispersed throughout the country. Tesla does not appear to have any locations in Japan.

Germany’s automotive footprint is similar to Japan in that it is spread out across the country. Bavaria, in the Southeast, is home to a number of BMW facilities. Baden-Württemberg contains a large presence from both Audi and Daimler. Once again, Tesla bucks the trend of locating in a traditional cluster, and has picked a location outside Berlin for its upcoming gigafactory in Germany.

Lastly, Mexico manufactures a sizable amount of vehicles each year (number six overall) to serve the US market. Global automotive manufactures have tended to cluster in the central states of Guanajuato and Mexico City. Closer to the US border, Monterrey also has a cluster of automotive facilities. Tesla does not have a presence in Mexico.

Tying it all together, the automotive footprint is vast, spans the globe, and tends to regionally cluster. To reach each local cluster, air travel is necessary. Nothing shows it better than a map of direct flights from the nexus of the industry: Detroit, Michigan, US. Detroit remains home to some of the largest automotive OEMs, suppliers, and research centers from all the global players. Detroit’s airport DTW is global hub but also has a number of flights that map nicely to the automotive supply chain: Monterrey (Mexico), Querétaro (Mexico), Munich (Germany), Nagoya (Japan), and Shanghai (China). 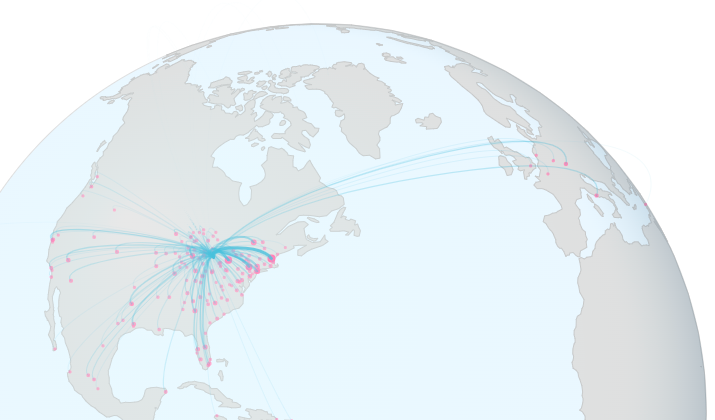 Yesterday I rented a boat and took the leader of one of Flexport's partners in Long Beach on a 3 hour of the port complex. Here's a thread about what I learned.

One of the operations that are common when processing solid surface products is sanding. This is heavy, repetitive work that requires skilled personnel. Such personnel is becoming increasingly difficult to find. In addition, it is important that the quality is guaranteed. It became increasingly difficult for Marlan to organize this task properly. The company therefore went in search of a way to automate this process as much as possible.

After delivery, the cobot was deployed within two weeks. Heerema was able to program it within half an hour, without any programming experience. After the implementation and installation, two employees were trained and the cobot was fine-tuned to determine the correct pressure when sanding. This step was also the start of further optimizing other parts of the production. According to Heerema, some employees were immediately enthusiastic, but others were afraid of losing their jobs. “But that’s not what we’re about at all. We want to make it easier for employees and give them the opportunity to increase their output.” The employees are now fully accustomed to the cobot and see it as a kind of colleague.

The cobot at Marlan is currently used for sanding bathtubs. This is a large object that is difficult to sand manually. A major problem here is monitoring consistent quality. Heerema: “But with a cobot you can guarantee an even pressure which also ensures constant product quality.”

The growing popularity of 3D printing for manufacturing all sorts of items, from customized medical devices to affordable homes, has created more demand for new 3D printing materials designed for very specific uses.

A material developer selects a few ingredients, inputs details on their chemical compositions into the algorithm, and defines the mechanical properties the new material should have. Then the algorithm increases and decreases the amounts of those components (like turning knobs on an amplifier) and checks how each formula affects the material’s properties, before arriving at the ideal combination.

The researchers have created a free, open-source materials optimization platform called AutoOED that incorporates the same optimization algorithm. AutoOED is a full software package that also allows researchers to conduct their own optimization.

Industry 4.0, an initiative from Germany, has become a globally adopted term in the past decade. Many countries have introduced similar strategic initiatives, and a considerable research effort has been spent on developing and implementing some of the Industry 4.0 technologies. At the ten-year mark of the introduction of Industry 4.0, the European Commission announced Industry 5.0. Industry 4.0 is considered to be technology-driven, whereas Industry 5.0 is value-driven. The co-existence of two Industrial Revolutions invites questions and hence demands discussions and clarifications. We have elected to use five of these questions to structure our arguments and tried to be unbiased for the selection of the sources of information and for the discussions around the key issues. It is our intention that this article will spark and encourage continued debate and discussion around these topics.

The success of a factory planning project is significantly influenced by the layout design. It contributes to make the production process more economical and reliable. Studies show that an effective layout can reduce the operating costs of a factory by up to 30%.

Layout design is a very complex planning problem characterized by the conflict between competing goals and restrictions. Both quantitative goals, such as material flow, and qualitative goals, like communication and adaptability of a layout, must be taken into account. In addition, regulatory requirements and norms, which are the restrictions the design is based on, must also be met.

Despite the high complexity, the arrangement of the operational functional units is usually done manually, either on paper or with a digital layout design software. The layout variants are then evaluated by experts to identify the optimal layout.

As manufacturing becomes digitized, Google’s methodologies that were developed for the consumer market are becoming relevant for industry, said Wee, who previously worked in the semiconductor industry as an industrial engineer. “We believe we’re at a point in time where these technologies—primarily the analytics and AI area—that have been very difficult to use for the typical industrial engineer are becoming so easy to use on the shop floor,” he said. “That’s where we believe our competitive differentiation lies.”

Meanwhile, Ford is also selectively favoring human brain power over software to analyze data and turning more and more to in-house coders than applications vendors. “The solution will be dependent upon the application,” Mikula said. “Sometimes it will be software, and sometimes it’ll be a data analyst who crunches the data sources. We would like to move to solutions that are more autonomous and driven by machine learning and artificial intelligence. The goal is to be less reliant on purchased SaaS.”

Microsoft creates a benchmark dataset for few-shot learning with object recognition. DeepMind acquires a robotics simulator. MIT launches a course on how to excel in Industry 4.0.