Worker safety has come a long since the turn of the 20th century through a variety of technological and regulatory improvements. As late as 1932, construction workers can be seen eating lunch 800 feet above the ground while unharnessed atop a steel beam. Thankfully, in most nations that lackadaisical approach to safety would not be tolerated today. The incident rate of work related injuries within private industry has continued to decline across the United States from 11 cases per 100 workers in 1970 to about 3 cases per 100 workers in 2020. In manufacturing, where more workplace hazards are present, the rate remains about 30-50% higher but has declined over time in a similar manner like the rest of private industry.

The Canary in the Coal Mine

The Petroleum and Coal sector is one of the best examples of the exponential reduction in worker deaths over the last century. Mines are among the most dangerous workplaces in the world with them being prone to uncontrolled explosion, flooding, and poisoning. In the United States, a long series of regulations have restricted the permissible equipment allowed in mines and required constant monitoring of hazardous gasses to better alert miners of impending danger. Also, rather than relying on canaries showing indications of discomfort, modern infrared sensors now continuously sample the environment for elevated levels of toxins. The figure below from the Centers for Disease Control shows the enactment of these regulations overlaid on a fitted curve of annual deaths related to coal mine explosions.

The exponential reduction in injury incidence appears to hold true across countries and sector. China, the world’s largest coal producer, has experienced similar declines in coal mining worker deaths although it is unclear as to why. In other industrial sectors such as poultry processing where the rates of incidence declined 82% from 1994 to 2016.

What are the most common injuries in manufacturing?

In 2020, contact with objects and equipment, exposure to harmful substances, overexertion, falls, slips, and trips, and being struck by an object are the top five most common injuries in manufacturing. These injuries primarily occur in active production, while transporting and moving material, and during installation or maintenance of machinery. The injuries affect all parts of the body with the upper extremities, body systems and hands being the most frequent. 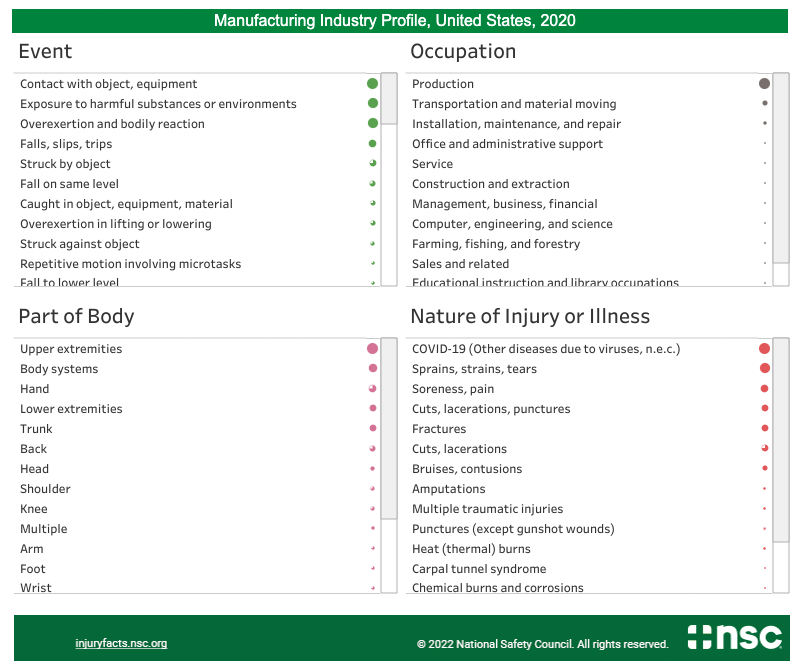 To further reduce these types of injuries additional sensing technology is needed to combat disorientation and collision. Lessons from the coal industry during the 20th century show if we can sense and monitor conditions we can proactively alert or avoid doing something very risky altogether. Whether it is sensing a physiological signal to assess overexertion or machine vision to avoid striking or colliding with unintended objects a number of companies continue to develop technology to reduce injuries and fatalities to zero.

Which companies are focusing on worker safety in manufacturing?

One of Fast Company’s most innovative manufacturing companies in 2022, Guardhat creates an integrated hardware and software platform for all things connected worker. In their words, “because industrial operations rely on people, the Guardhat Platform was built to create the IIoP - the Industrial Internet of People.” They also develop a range of wearable devices from their flagship smart hardhat to small form factor body-worn devices with ruggedized design to provide location tracking and core safety features such as “SOS, fall detection, man-down, and proximity detection.”

StrongArm’s SafeWork System provides companies a single source of truth, intelligent reporting, and industry benchmarking for “workplace risk management and proactive safety interventions.” Their FUSE-line of IoT wearable sensors reduce the risk of ergonomic or musculoskeletal injuries due to repetitive movements like bending, lifting and twisting through auditory, haptic and visual alerts. They tie together all the worker safety data into a platform that can “proactively predict problem areas and behavioral trends within an organization” while reducing insurance costs.

Everguard’s Sentri360® platform, “connects technologies in computer vision, wearables, and sensor fusion to improve worker health and safety.” It “ties together disparate industrial technologies like edge servers, real-time location services (RTLS), computer vision (CV), lidar/radar, and wearables, allowing them to interact in ways not possible independently.” Its proprietary sensor fusion approach and AI is what separates itself from other workplace safety platforms.

As innovative companies seek to solve the workplace safety problem, other innovations are posing new hazards. Autonomous mobile robots reduce the need to lift and move materials and can be sent into hazardous environments but create new collision opportunities while their safety guidelines are still catching up. Collaborative robots are placed in close vicinity human workers and require close study of their failure modes to avoid errant contact. Ultimately, new technologies should continue to improve the safety of manufacturing because at the end of the day “a safe workplace is an efficient one.”

The Changing Geopolitics Of Manufacturing And Its Supply Chains


Manufacturing is many things. Producing advanced electronics is not the same as making shoes. Nonetheless, whenever something is produced, infrastructure of some kind is involved. Hard infrastructure, such as factory networks requiring sunk cost investments in high technology takes too long to develop. Soft infrastructure like supplier relationships may look easy to reproduce, but these can be tricky to evolve as they form organically. For example, try competing with the fashion production chain in Italy’s Emilia-Romagna region (the subject of the 1984 book The Second Industrial Divide, which argued we should abolish standardized mass production for a system of flexible specialization.)

Regionally dense supplier networks have always been a good idea. Collaboration is better face-to-face, or geographically proximate because skills tend to develop in clusters. Whatever the top skill in a region is becoming the priority for young talent. Consequently, this creates a positive feedback loop, and it is also more practical. Whether it is Northern Italy, the auto industry in the US upper midwest (see Automation Alley), New England’s high tech manufacturing hub, or Shenzhen’s hardware production networks, Shanghai’s automotive sector, or emerging Chengdu in southwestern China, which now deserves to be known for far more than “producing” Pandas, manufacturing tends to concentrate geographically. Disruptions are not the only reasons they are back in the big leagues.

Reshoring can be argued logically based on total cost of ownership. The reshoring movement also has an obvious nationalist rationale. Nation-states compete for attention and resources, but within their own borders, they redistribute (somewhat) fairly. Manufacturing is a source of great pride, so globalization has always been limited in scope and theory. Globalization, on the contrary, has no democratic infrastructure. Fairness is therefore up for grabs.


On Wednesday, the Department of Energy, the Cybersecurity and Infrastructure Security Agency, the NSA, and the FBI jointly released an advisory about a new hacker toolset potentially capable of meddling with a wide range of industrial control system equipment. More than any previous industrial control system hacking toolkit, the malware contains an array of components designed to disrupt or take control of the functioning of devices, including programmable logic controllers (PLCs) that are sold by Schneider Electric and OMRON and are designed to serve as the interface between traditional computers and the actuators and sensors in industrial environments. Another component of the malware is designed to target Open Platform Communications Unified Architecture (OPC UA) servers—the computers that communicate with those controllers.

Dragos says the malware has the ability to hijack target devices, disrupt or prevent operators from accessing them, permanently brick them, or even use them as a foothold to give hackers access to other parts of an industrial control system network. He notes that while the toolkit, which Dragos calls “Pipedream,” appears to specifically target Schneider Electric and OMRON PLCs, it does so by exploiting underlying software in those PLCs known as Codesys, which is used far more broadly across hundreds of other types of PLCs. This means that the malware could easily be adapted to work in almost any industrial environment. “This toolset is so big that it’s basically a free-for-all,” Caltagirone says. “There’s enough in here for everyone to worry about.”


“To develop complex robotic manipulation systems, we need both visual realism and accurate physics,” says Marchese. “There aren’t many simulators that can do both. Moreover, where we can, we need to preserve and exploit structure in the governing equations — this helps us analyze and control the robotic systems we build.”

Drake, an open-source toolbox for modeling and optimizing robots and their control system, brings together several desirable elements for online simulation. The first is a robust multibody dynamics engine optimized for simulating robotic devices. The second is a systems framework that lets Amazon scientists write custom models and compose these into complex systems that represent actual robots. The third is what he calls a “buffet of well-tested solvers” that resolve numerical optimizations at the core of Amazon’s models, sometimes as often as every time step of the simulation. Lastly, is its robust contact solver. It calculates the forces that occur when rigid-body items interact with one another in a simulation.

Driving Toward A Sustainable Future


A physics-based electronics reliability assessment tool, Sherlock enables Schirmer and his team at BMW to assess the performance of PCBs under a range of thermal cycles, including temperature changes and static temperatures. BMW can also test PCB components for shock, random vibration, and steady mechanical loads.

Given the growing demand for new EV designs and product features, the Department of Power Electronics is under pressure to complete its reliability studies quickly — but without compromising analytic depth and breadth. “With Ansys Sherlock, I’m able to manage 90 to 95% of my analytic modeling with a single tool that integrates easily with Ansys Workbench, Ansys physics-based solvers, and ECAD tools,” says Schirmer. “I’m grateful to have a partner who understands my needs and responds to them with the right capabilities.”


The energy efficiency of a combined heat and power (CHP) can reach about 85%, whereas conventional thermal power plants operate only at 45% efficiency or lower. CHPs perform better mainly because the heat from generators can be used as a energy source to meet heat demands or power refrigerators to generate cold water, in other words the “waste” heat is used and not wasted. Therefore, a growing number of factories and commercial buildings are installing combined heat and power (CHP) systems that include various energy storage devices. To reduce the energy cost of CHPs, optimal operation plans to satisfy time-varying energy demands with minimum energy cost are required. However, conventional operation planning methods using optimized calculation have an issue with long computing time. Especially these days, operation plans need to be generated within a few minutes or even seconds to make up for output of renewable energy sources.

NVIDIA adapts their GPU architecture to better support AI transformers while Intel seeks to catch up by building a stable of chips that span a range of AI tasks. The Financial Times describes what it is like to build a super yacht. Infor talks about what’s next after hitting $1 billion in SaaS revenue. Cybersecurity leaders launch a new coalition focused on securing operational technology.